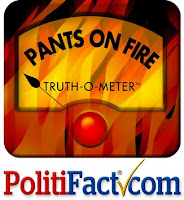 Every year, the organization PolitiFact puts out its "Lie of the Year" award for the biggest political whopper. This year, apparently bowing to the gods of "both sides do it" centrism, they actually chose the true claim by Dems that Rep. Paul "Lyin'" Ryan's plan to voucherize Medicare would end the program as it exists today. Paul Krugman has the smackdown of PolitiFlop's bogus award. Added: here's the HuffPo's Jason Linkens' detailed deconstruction of PolitiFlop's nonsense.

If all we can expect is for the media to be timid in the face of one side in the political world telling the overwhelming number of political lies, then we deserve the politics we get. If outfits like PolitiFlop think they need to appease the right, lest they be bombarded with cries of "bias" from the wingnutosphere, then their "service" is no longer needed.

(image: You've earned it, PolitiFlop)
Posted by Hackwhackers at 12:05 PM