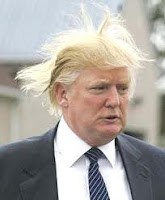 TV reality host and blowhard birther Donald "Rump" Trump has a new scam: he's trying to round up the Rethuglican candidates for a "debate" later this month that he will host on a small cable channel. Since everything that Rump does is all about Rump, we'll have to assume this is his forum for upstaging the pathetic Rethuglican field and for self-promotion.

Rump likes to project himself as a self-made billionaire, but his multi-millionaire father set him up in the family business. He's been in and out of bankruptcy court more than once, and led the lunatic "birther" fringe until his humiliating smack down by President Obama at last April's White House Correspondents' Dinner. Rump quickly fell in the polls after the President's birth certificate was released.

To their credit, Rep. Ron Paul and former Gov. Jon Huntsman declined to kiss Rump's rump and participate in the "debate," which has been memorably -- and accurately -- described as "the clown hosting the circus."
Posted by Hackwhackers at 12:33 PM