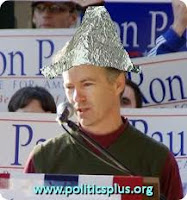 We had to laugh at reports that far-right Social Darwinist Sen. Rand "Sprinklerhead" Paul (R - Galt's Gulch) was denied boarding a flight in Nashville, after he set off metal detectors.

Was it the tinfoil hat? Was it a weapon sequestered in his nether regions for self-defense against Federal black helicopters? Did he just have a meal rich in iron? The most likely explanation is that the Transportation Security Administration has a secret device to detect nutcases, which would certainly have detected Sprinklerhead.
Posted by Hackwhackers at 2:33 PM