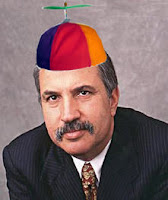 The "Mustache of Understanding," a.k.a. New York Times columnist Tom Friedman, has a well-known hobby horse: a "centrist" third party on the ballot in 2012. He might as well be a paid publicist (hmmm) for one of these political unicorns -- "Americans Elect." Not surprisingly, he's used his valuable space in the Sunday Times to once again ride the same nag. Outside of a few anonymous billionaires pulling its strings, and deluded, misinformed or co-opted people like Friedman, it's hard to detect a clamoring for an "Americans Elect" third party, especially in an election year as critical as 2012. What then is Friedman fronting for? Robert Kuttner has this (excerpted) analysis:

"Tom Friedman of the New York Times is at it again, claiming that what America needs to fix our economic and political mess is a radically centrist third party. Radical in this case means conservative when it comes to belt-tightening. Friedman in Sunday's Times urges a third party 'to fill the space between the conservative Santorum (or even Mitt Romney) and the left-of-center Barack Obama.'

"Friedman has written this column before. [snip]

"As the Friedman column suggests, a lot of the pundit class laps up this 'radical-center' malarkey. The Washington Post ["Kaplan Daily"] editorial page has been an ongoing commercial for fiscal austerity, and (former U.S. Comptroller General David) Walker has generally gotten a very respectful press. It was the influence of the deficit hawks that pushed Obama into appointing the late and little-lamented Bowles Simpson commission, which in turn compelled the president to waste nearly a year obsessing about budget balance when he should have stayed focused on recovery. [snip]

"The combination of bad economic advice, a ballot slot bought and paid for by secretive private equity and hedge fund players, and a candidate who became a media figure courtesy of Peter G. Peterson, epitomizes everything messed up about our politics. How fitting that Tom Friedman should be its tribune."