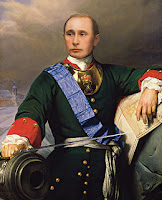 This guy is almost as delusional as Frothy Mix, but far more dangerous:

"Russian Prime Minister Vladimir Putin warned that his opponents could provoke unrest after Sunday's presidential election, even going so far as killing a prominent opposition figure to stoke outrage against his government.

"Putin is all but certain to regain the presidency, but his allegations Wednesday reflect heightened tensions four days before the vote and nervousness about the protests expected to follow.

"'They are looking among well-known people for a sacrificial victim," Putin said during a televised meeting with campaign activists. "They could, I'm sorry, knock someone off and then blame the authorities.'"

Or, of course, his "delusion" could simply be a projection of what he already has planned.
Posted by W. Hackwhacker at 3:54 PM