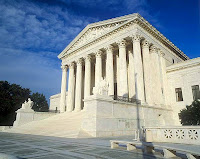 Today the Supreme Court begins three days of argument over the Affordable Care Act. Today, the time will be devoted to hearing arguments as to whether the Act can be reviewed at this point, before it is fully implemented in 2014. Tomorrow's agenda will be devoted to the core of the Act: the individual mandate.

There's been speculation about how the Justices will ultimately break. We suspect three certain opponents of the Act would be Justices Clarence "Uncle" Thomas, "Anti" Antonin Scalia, and Samuel "The Whisperer" Alito. Four Justices seem likely to support the Act: Justices Breyer, Ginsberg, Sotomayor, and Kagan. The other two? Justice "Don't Call Me Jack" Kennedy and Chief Justice John "Repeat After Me" Roberts are not quite as predictable. Of the nine Justices, Uncle Thomas should recuse himself, since his drunk-caller wife, Ginni Gin Gin, has been active on the wingnut circuit opposing the Act. However, since he lacks judicial integrity, Uncle Thomas won't recuse himself, and is just itching to strike the Act down.
Posted by Hackwhackers at 9:22 AM