What "GOP" Really Stands For 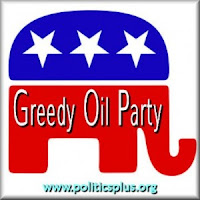 You would think that with oil companies posting record profits and gasoline prices as high as they are, the Senate would shy away from continuing their $24 billion in subsidies to oil and gas interests. You would be wrong. Yesterday, nearly all Senate Rethuglicans and four "Democrats" voted to retain the publicly unpopular oil subsidies by a 51 - 47 vote, thus unable to reach filibuster-proof 60 votes.

It shouldn't surprise anyone that oil money influenced the vote: the 47 Senators who voted to continue the costly subsidies have received $23,582,500 in contributions over their careers from oil and gas interests, compared to $5,873,600 received by those voting to end the subsidies. Once again, the Rethugs have protected the powerful at the expense of the middle class. Sadly, too many Rethuglican low-information voters won't sniff out this connection, and will continue to harangue Democrats about "wasteful spending," failing to acknowledge the hand in their back pocket belongs to big oil.
Posted by Hackwhackers at 1:31 PM