A Budget For Lockheed and Northrup 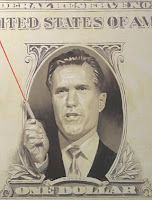 Some of the sharpest contrasts between President Obama's budget priorities and those of the hard right and likely Rethuglican nominee, the weird Willard "Etch-A-Sketch" Romney are the Rethugs' devastating cuts proposed in domestic spending for education, health care and research, while showering the Pentagon with increased spending that has not been requested and is not necessary (except for defense contractors, of course). While Willard's budget details are, er, sketchy, he's endorsed Rep. Paul "Lyin'" Ryan's reverse Robin Hood scheme that would plunder 15% of the domestic budget to pay for new tax cuts for the wealthiest Americans.

Especially disturbing is the signal that the inflated military budget sends. Rethugs love to spend major money on expensive hardware (defense contractors, again) but not on body armor or veteran care. They also promote an aggressive, interventionist "bomb now, negotiate later" foreign policy, especially in the Middle East, so missiles, bombs and weapons systems are needed, despite America's waning taste for endless wars in that region. But the Rethugs need to pay off their most loyal contributors, no matter how many lives it costs.
Posted by Hackwhackers at 9:12 AM