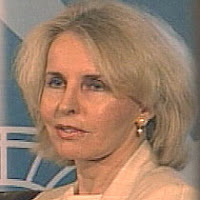 Just for laughs, and for an insight into the incestuous culture of the Washington Village elites, please read blogger tBogg's takedown of Village doyenne Sally "Party Girl" Quinn's latest musings on the passing of the Washington social scene as she knew it. It's been a while since we've noted Party Girl's extravagant cluelessness, but the wife and ex-mistress of former WaPo editor Ben "Out Of It" Bradlee has uncorked a doozy in the Washington Post Magazine. Sample howlers (our parentheticals):

"The Obamas have been roundly criticized for not being part of the Washington social scene. (Oh? Who besides you?) The question is, does it matter? Could Obama win or lose the presidency because he has dissed the Washington community? I suspect the answer is no.(You suspect right) It doesn’t matter anymore."(Yes, dammit, he should have spent more time at your parties and less time...presidenting)

"Washington has become a community of small groups of people, mostly staying within their circles, occasionally making a foray out into the bigger world to large events, only to be turned off by the endless corporate 'fundraiserness' of it all. How special can you feel when you know you have to pay to go to an event and then get a bad seat on top of that?" (Ben Out Of It and Party Girl liked the free food and booze, good seats and abundant nasty gossip in the old days -- made them feel "special")

Party Girl went after the Clintons after they declined her social invitations, and she's not too pleased with the Obamas for similar slights. After all, it's all about Party Girl and Ben Out Of It and their lost influence.