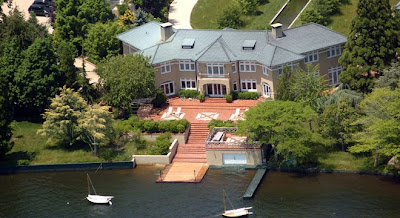 It was a gathering of the mega-wealthy elites for the Secret Offshore Accounts poster boy Willard "I Like to Fire People" Romney at a series of fundraisers in the Hamptons this weekend. Mega-billionaire Kochs and Perelmans mingling with the lesser multi-millionaires (some unwilling to give their names for fear of hurting their business), all there with one purpose: to save America for them, er, from Obama! The noblesse concern for the poors was manifest:

* Lowest tax rates in 50 years; stock market gained back much of its losses since 2009; record corporate profits 3 years running. Believe in America!

(Photo: Hampton estate of Revlon billionaire Ron Perelman, site of one weekend fundraiser for Millionaire Mitt.)
Posted by W. Hackwhacker at 10:09 AM