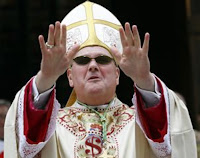 Look for this over-stuffed slug (left) to give the benediction one night at the Rethuglican National Convention (unless an Act of God intervenes -- hee-hee). That would be pedophile protector Cardinal Timothy Dolan of New York. Here's Andrew Sullivan's take on the "Republican Party Cardinal:"

"And make no mistake: Dolan is an old-school Catholic pol - a figure who approved payments to molesting priests to expedite their firing, brazenly lied about it, then ran away abroad when the press demanded an explanation. His most important issues are criminalizing abortion, stripping gay couples of any civil legal protection, and making sure that non-Catholic employees of Catholic hospitals and schools be denied access to insured contraception. That he is saying the benediction for a ticket that explicitly endorses a priority for the super-rich over the working poor and views illegal immigrants as beneath contempt also tells you a lot about Dolan's priorities."

In other words, he's just the kind of pol-in-a-pulpit that should shame anyone calling themselves Catholic.
Posted by W. Hackwhacker at 6:13 PM