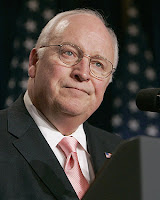 
“If President Obama were participating in his intelligence briefings on a regular basis then perhaps he would understand why people are so offended at his efforts to take sole credit for the killing of Osama bin Laden.”

This from a "man" who should be doing time in a Federal penitentiary, and can't travel to certain countries ("Viva Espana!") for fear of prosecution. And "intelligence briefings?" Does the Dick remember the "Bin Laden determined to strike in U.S." intelligence briefing 36 days before 9/11, after which President Dumbya proclaimed to the intelligence briefer, "All right, you've covered your ass now"?? Perhaps the Dick was dozing off. (See also the NY Times article linked to in the update to the "Life from the Ruins" posting below if you want the full picture of Cheney's and Bush's incompetence.)

Of course, President Obama has not only NOT taken sole credit, he always passes the credit around:


"Tonight, we give thanks to the countless intelligence and counterterrorism professionals who’ve worked tirelessly to achieve this outcome. The American people do not see their work, nor know their names. But tonight, they feel the satisfaction of their work and the result of their pursuit of justice.

"We give thanks for the men who carried out this operation, for they exemplify the professionalism, patriotism, and unparalleled courage of those who serve our country. And they are part of a generation that has borne the heaviest share of the burden since that September day.

"Finally, let me say to the families who lost loved ones on 9/11 that we have never forgotten your loss, nor wavered in our commitment to see that we do whatever it takes to prevent another attack on our shores.

"And tonight, let us think back to the sense of unity that prevailed on 9/11. I know that it has, at times, frayed. Yet today’s achievement is a testament to the greatness of our country and the determination of the American people."

Is it too much to ask this sack of shite to crawl back under the rock from whence he came?