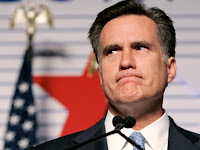 You know things are going badly for clueless plutocrat Willard "Why Can't I Get This Airplane Window Open" Romney when a poll of NASCAR fans favors President Obama over him. Willard, who famously said he didn't follow NASCAR but knew some of the team owners, has an indelible image of someone who is out of touch with average Americans (at a NASCAR race, he belittled the makeshift rain gear of some of the fans). The fact that he seems to be falling behind with the NASCAR audience has to be deeply concerning to his campaign.
Posted by Hackwhackers at 10:42 AM