Disability Rights Treaty Goes Down at the Hands of Far-Right 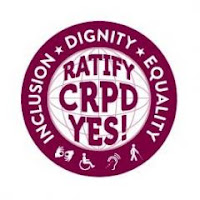 Here's Lawrence Downes on the scene in the Senate as the cowardly morons Rethuglican senators got ready to vote on the United Nations Convention on the Rights of Persons With Disabilities (to conform international rights to those Americans already enjoy):


"One by one, according to Roll Call, the senators approached Mr. [Bob] Dole to pat his shoulder or clasp his hand, making gestures of respect for the man who was for many years the Republican majority leader.

"Then he was wheeled away, and all but a handful of the Republicans bailed out on him. The treaty failed. It needed a two-thirds vote to pass, or 67 votes, and fell six short.

"So much for America’s support of a global agreement 'to promote, protect, and ensure the full and equal enjoyment of all human rights and fundamental freedoms by all persons with disabilities.'

"The vote was a triumph for Glenn Beck, Rick Santorum and others on the hard-right loon fringe, who have been feverishly denouncing the treaty as a United Nations world-government conspiracy to kill disabled children (you can look it up)."

Bob Dole, of course, is a decorated, disabled American veteran from World War II, as well as the former Republican presidential standard bearer in 1996. He was there to voice support for passage of the treaty; unfortunately, however, only a handful of Rethuglican Senators voted for it. So we are left once again with America justly ridiculed because of the actions of the far-right bums who spoke and voted against the treaty. They aren't fit to clean out anyone's bed pan.

BONUS: Also, see Charles P. Pierce on how this shows yet again that there is no such thing as a "decent Republican."