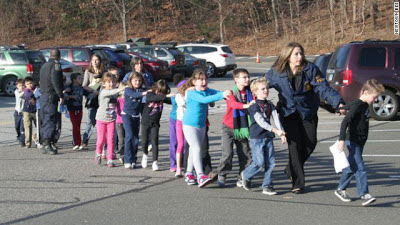 We can't believe what we're watching: a shooter at an elementary school in Newtown, CT this morning has apparently shot and killed at least 27 people, the majority of whom were children. Several news organizations are updating the toll, as the chaotic scene develops, but we're told that the gunman, who was shot and killed, was 20 year old Adam Lanza*, and armed with two 9mm handguns and an assault weapon. How could anyone commit such a deeply sick and evil act?

What makes this especially horrifying is the location of the murders: an elementary school. The young age and sheer number of casualties will rank this as perhaps the most devastating mass shooting in U.S. history, along with Columbine High School and Virginia Tech. This is so hard to absorb, we're at a loss for words.
______
*initial media reports identified the shooter as "24 year old Ryan Lanza" who is actually the brother of the alleged shooter.

(photo: Children are led away from the Sandy Hook Elementary School. Newtown Bee photo)
Posted by Hackwhackers at 1:22 PM