From a news story:

Romney also visited with Pacquiao in his dressing room before the fight, wishing him well in the bout.

"Hello Manny. I ran for president. I lost," Romney told the fighter, according to Pacquiao publicist Fred Sternburg."

Pacquaio proceeded to get knocked out in the 6th round. We're hoping Willard campaigns for Rethugs in coming years.

BONUS: Here's a picture of Willard at the precise moment Pacquaio went lights-out (same face Willard had when Ohio was called for Obama, BTW): 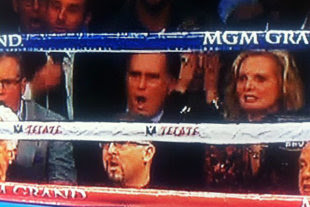 Posted by Hackwhackers at 4:02 PM