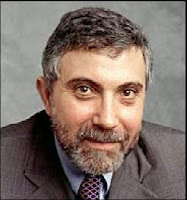 Here's what Professor Krugman has to say in "Makers, Takers, Fakers":


"In the past, Republicans would justify tax cuts for the rich either by claiming that they would pay for themselves or by claiming that they could make up for lost revenue by cutting wasteful spending. But what we’re seeing now is open, explicit reverse Robin Hoodism: taking from ordinary families and giving to the rich. That is, even as Republicans look for a way to sound more sympathetic and less extreme, their actual policies are taking another sharp right turn."

Several Rethuglican governors, including some with national aspirations like Louisiana's Bobby "Kenneth" Jindal, are leading efforts in their states to replace the progressive state income tax with a regressive sales tax. Others, like Virginia's Gov. Robert "Blowdry Bob" McDonnell, are proposing eliminating the state gasoline tax and hiking the sales tax, thus rewarding gas-guzzling motorists and penalizing low- and middle-income people.

Rethuglicans are in the process of trying to air-brush their policies and philosophy to make them more palatable to the American public. Pursuing these tone-deaf, regressive policies lays bare their true colors for all to see.