Run For Cover Cartoon of the Day 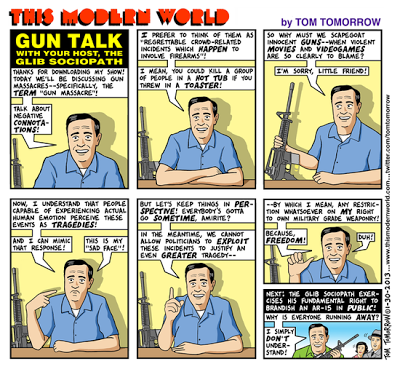 Daily Kos has put together a roster of shootings in the past few days to illustrate that, aside from mass gun murders like Newtown, there are random single/double/triple killings each day. We've just become numb to the proliferation of gun violence, which is the strategy of the National Rampage Association's demented leadership.

BONUS: Typical of the Rethug pols blowing smoke on gun violence is Rep. Marsha Blackburn (NRA-Tenn.), who said on Face the Nation Sunday:


"You do because you want to make certain that people are safe in public places. You want to make certain that children are safe at school. But, Bob, I've got to tell you, doing a so-called assault weapons ban is going after a symptom, and as teachers have said to me, don't focus on whatever is the weapon, get to the root cause. Look at some of these mental health issues. Look at some of these drugs that are involved in this. Look at some of the is violence that is permeating this society. Teachers, parents are all saying, you know, you need to drill down on this a little deeper. Be a little bit more thoughtful on it. And, you know, I'm with the speaker. Why should law-abiding citizens be compromised because you've got some bad actors over here that are not complying."

Posted by Hackwhackers at 11:05 AM