Local Yokel Not To Be Confused With Justice John Marshall 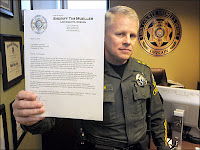 In a letter to Vice President Biden, Linn County (Oregon) Yokel Sheriff Tim Mueller says he'll be the one to decide what Federally-mandated gun laws he will or will not uphold in his neck of the woods, f**k you very much. As the nullifying Oregon solon stated in an interview:


"We're restricted and prohibited from enforcing all types of federal laws, including immigration laws. It would be unreasonable for anyone to think that I would enforce a federal firearms law."

Yes, totally unreasonable! Daily Kos' 88 Kathy has penned a fantasy response letter from VP Biden that encapsulates our thoughts on this "we are a cafeteria of laws" cop:


Dear Linn County Board of Commissioners.

Your sheriff has lost his mind. Please remove him from office for the safety of the public.