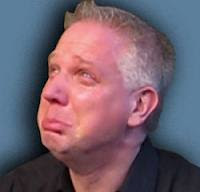 When last we saw unhinged weeper Glenn "Boo Hoo" Beck, he was exiting Fux because his over-the-top conspiracy theories, smears about progressives, and emotionally unstable breakdowns had become an embarrassment even for Fux, and more importantly its advertisers.

Now, the self-described "rodeo clown" is going for a makeover as a "libertarian," figuring that he can gain some respectability by pasting a trendy label over his absolutely crazy past. Floundering in the hinterlands of Crazytown cable after Fux, Boo Hoo is hoping that his makeover will sell to the rubes that bought his original act. Well, crazy is what crazy, uh....is, and we don't think Boo Hoo's attempt to rehabilitate himself as a "thinking libertarian" (a contradiction if we ever saw one) will fly. As the article points out, there's far too much video of the "rodeo clown" to ignore.
Posted by Hackwhackers at 3:51 PM