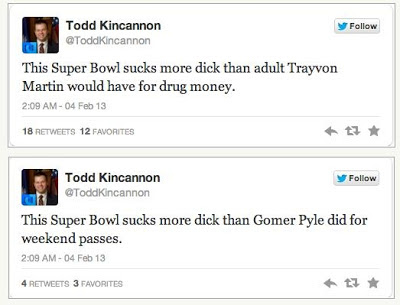 Where else but in the Rethuglican/ New Confederate/ Stupid Party could a primitive life form such as Todd rise to State party executive director?! Lest anyone think these tweets were aberrations, we checked out his twitter feed, and hoo-boy that's some foul-mouthed, foul-minded piece of work right there! As a bonus, we would like to share this update about Todd's ...um ... nasty habits with our readers to, uh, flesh out our portrait of this fine Southern gentleman pervert:


"Rightwing blogger Brooks Bayne, attempting unsuccessfully to clean up the perv log in his party’s own eye (THE BIBLE), took the (engaged) Kincannon to task last October for sexting his cock to young ladies he did not know." (our emphasis)