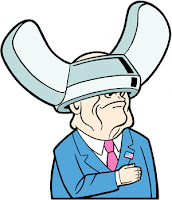 Wing nuts of all varieties -- Talibangelists, secessionists, birthers, starve-the-poor-feed-the-rich, etc. -- have descended on the Washington, DC area today for their annual group grope that they call the Conservative Political Action Conference (CPAC).    There are booths there from every far right group, like the National Rifle Shoot Up A School Association, Tea Party Patriots, and the John Birch Society.

As the Rethuglican/New Confederate/Stupid Party pretends to rebrand itself, the CPAC crowd remains defiantly reactionary and openly backward-looking.  Just look at the losers who are invited to speak:  Snowbilly grifter Sarah "Winky" Palin, Donald "Rump" Trump, former Rep. Allen "Commie Counter" West, and former Sen. Jim "Demented" DeMint.  The Rethuglican Attorney General for Virginia, Ken "Cooch" Cuccinelli will be expounding on women's issues as he waves a transvaginal probe in the air, as Rick "Frothy Mix" Santorum explains why America needs to be a theocracy, not a democracy.

Each year during the CPAC-fest, there come all kinds of extreme, out-of-touch sound bites from the speakers or attendees, and this year should be no different.  You could even replay them from the past 4 years or so, and you'd be hard pressed to see a difference.  Increasingly, America sees that this "movement" has no solutions, just slogans.
Posted by Hackwhackers at 11:39 AM