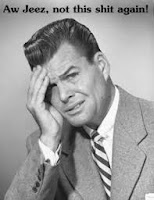 We'll leave it to Messrs. Pierce and Krugman to opine on the atmospherics of the President's capitulation 2014 budget.  But first, here's what "a longtime Obama aide" had to say about the Social Security- and Medicare-cutting budget:

"We're not going to have the White House forever, folks. If he doesn't do this, Paul Ryan is going to do it for us in a few years," said a longtime Obama aide, referring to the 2012 Republican vice presidential candidate who proposed a sweeping overhaul of Medicare that would replace some benefits with vouchers.

Now, we have a Democratic administration, empowered by a solid re-election, that is proposing to its most loyal supporters that they support at least a partial sellout of the Democratic party's greatest legacy because, some day, a Republican president might do something much worse. (As though said imaginary Republican president won't go ahead and do much worse anyway, and claim a national mandate for it while he's at it, and eventually find a way to blame "a Democratic president" for having launched the process in the first place.) I literally never have heard this argument made in any political context. I certainly never have heard it from anyone in an incumbent administration. If this is your rationale for making policy, what in the name of god is the point of running for office in the first place? Nobody's president forever. You get elected. You enact the policies on which you ran, and of which the voters evidently approve. If, one day down the line, the voters decide to approve someone else, and someone else's policy, that's just the way it has to go. Caveat emptor, and all that. You certainly don't decide to enact policies based on their being the most palatable variation of something an imaginary future president might do. That's just nuts. On the national economy, we've abandoned Keynes, and Greenspan, and Laffer, and we've decided to cast our lot with Nostradamus.

Since the beginning, the Obama administration has seemed eager to gain the approval of the grownups — the sensible people who will reward efforts to be Serious, and eventually turn on those nasty, intransigent Republicans as long as Obama and co. don’t cater too much to the hippies.This is the latest, biggest version of that strategy. Unfortunately, it will almost surely fail. Why? Because there are no grownups — only people who try to sound like grownups, but are actually every bit as childish as anyone else.

After all, if whoever it is that Obama is trying to appeal to here — I guess it’s the Washington Post editorial page and various other self-proclaimed “centrist” pundits — were willing to admit the fundamental asymmetry in our political debate, willing to admit that if DC is broken, it’s because of GOP radicalism, they would have done it long ago. It’s not as if this reality was hard to see.

So, here we are again, just as we were last year, and the year before that, and the year before that, and...  We think it's fairly safe to say this Administration, re-elected into office by a significant margin, is now (and forever has been) much more interested in making "a deal" that pleases the "sensible people" than it is in upholding the principles of justice, fair play and protecting the vulnerable, principles upon which they were elected -- twice.  There is no multi-dimensional chess going on here that would result in backing the Rethug extremists into a corner;  it's simply back-pedaling ever faster until you manage to snatch defeat out of the jaws of victory.  Shame on them, and on us if we allow it to happen.
Posted by W. Hackwhacker at 3:02 PM