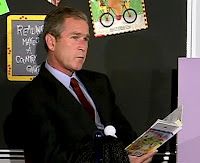 Tomorrow will mark the opening of the George W. Bush Presidential Library Dumbya's Preznitshal Lieberry, thus providing hours of irony and humor for those who remember his failed presidency.  But before the Worst. President. Ever. is honored for....uh, for....well for little or nothing, let's consider this list of his greatest blunders / falsehoods / criminal negligence, etc. from Daily Kos.

Having left office with a terrible 22% approval rating, Dumbya's enablers and co-conspirators are busy trying to rewrite history and salvage Dumbya's legacy, and this Library will be part of an attempt to do that.  The only thing worth pointing to is the initiative for fighting AIDS in Africa, which was laudable.  But balance that with his negligence before 9-11, his shift of resources from fighting al Qaeda to invading Iraq, which had nothing to do with the 9-11 attacks, putting two wars and a massive prescription drug benefit on the national credit card, messing up the Katrina response, and presiding over the financial meltdown and economic collapse as he left office.  All of the captured e-mails, photos, mixed media displays and other touches won't cover up those abject failures of someone who was so ill-equipped for the highest office in the land.

(photo:  A copy of "My Pet Goat" should be at the center of Dumbya's library, along with the August 6, 2001 CIA memo warning him that "Bin Laden Determined to Strike Inside U.S.")

Posted by Hackwhackers at 10:55 AM