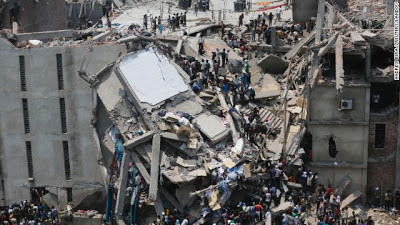 After the disastrous collapse of the Rana Plaza factory building in Bangladesh that killed an astonishing 1,127 people, a number of companies have signed an agreement that would require their suppliers to manufacture goods in safe, structurally sound buildings.  Such major international companies as Marks and Spencer, H&M, and Bennetton have pledged to abide by the agreement.  Not so a number of U.S. companies, who are putting their profits over the safety of thousands of third-world workers who are struggling to survive in their work environment.

Who are among the "dirty dozen" U.S. companies?  Walmart (surprise!), Gap, Macy's, Sears/K-Mart, J.C. Penney, Target, and VF Corporation (Wrangler jeans and North Face outerwear).  Shame. On. Them.  And remember who they are.

Posted by Hackwhackers at 1:52 PM