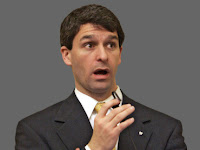 While it's clear that Virginia Gov. Bob "Blowdry Bob" McDonnell's scandal-tainted Governorship is sinking fast -- there's speculation that he may even resign shortly -- it was thought that Rethug gubernatorial nominee and transvaginal probe enthusiast Ken "Cooch" Cuccinelli would escape the taint.  Not so fast. It appears that the same corporate individual that was lavishing Blowdry Bob's family with gifts and favors has been "nice" to Cooch, too. Here are the details.

Maybe it's Cooch that need to be further probed.

(image:  Not so pleasant when the probe's on the other....foot)
Posted by Hackwhackers at 1:46 PM