The Day The Tide Turned 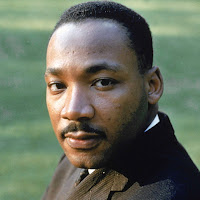 With today's marking of the 50th anniversary of the March on Washington, we also mark a turning point in this nation's history.  Prior to August 28, 1963, the civil rights movement hadn't gained the nation's full attention, although that year's vicious response to non-violent civil rights marchers in Birmingham, AL had turned the nation's stomach and paved the way for the March.  It was from Birmingham that Dr. Martin Luther King wrote his historic "Letter from Birmingham Jail," in which he defended non-violent protest against segregation.  The 300,000 strong march focused the nation's attention on the goals of the civil rights movement, so memorably and clearly stated by Dr. King's "I Have A Dream" address.  The dream hasn't been fully achieved -- and perhaps never will be as long as haters hate -- but hopefully with each new generation, we'll put more distance between ourselves and the evil of discrimination.

The March on Washington featured a variety of talent, including Mahalia Jackson, Bob Dylan, and this folk trio, who had a top ten hit with "If I Had A Hammer."

Posted by Hackwhackers at 11:48 AM

Labels: 50th Anniversary of the March on Washington