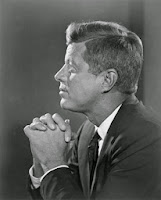 For those of us of a certain age, there will always be a feeling of lost innocence and melancholy on each anniversary of President Kennedy's assassination 50 years ago today.  It was almost impossible to comprehend at the time:  a youthful, smart, witty, handsome member of the greatest generation suddenly dead from an assassin's bullets.

There are those "where were you when..." moments in life, and this was certainly the one for our generation.  We were sophomores in high school when the news broke over the radio after 2 p.m. Eastern time.  Gym class for one, chorus for the other.  Everyone was overcome with shock and grief as we sat in silent class rooms later listening to the radio over the public address system.  "This can't be happening," must have been what most were thinking and feeling.

It was about a year before Vietnam heated up and about a year after the Cuban missile crisis had ended.  It was a time of growing awareness of the civil rights cause, and of urgency in the race to the moon.

We'll never know how this country would have changed had President Kennedy lived and served two full terms.  The Vietnam War?  We may have pulled out before committing thousands of ground troops.  Cynicism about Government and institutions? A different course of events in Vietnam and with the civil rights movement might have affected that.  We do know that Kennedy's agenda on civil rights and space exploration was strengthened and implemented (to his often-forgotten credit) by President Lyndon B. Johnson.   But we're still left with questions about what might have been, what we might have been as a country.  The assassin's bullet took all that away, too.
Posted by Hackwhackers at 11:08 AM