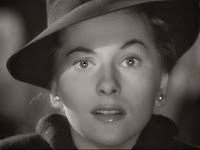 One of the last remaining stars from Hollywood's Golden Age, Joan Fontaine, has died at the age of 96.  In 1941, Ms. Fontaine won an Academy Award for her role in Alfred Hitchcock's "Suspicion," co-starring with Cary Grant.  Her breakout role was in the 1939 movie "The Women," when she held her own amidst a cast including Joan Crawford, Norma Shearer, Paulette Goddard and Rosalind Russell.  Other notable films included 1940's "Rebecca,"  1943's "Jane Eyre," and 1952's "Ivanhoe."

In addition to her acting, Ms. Fontaine was a certified pilot and balloonist, as well as a Cordon Bleu chef and licensed interior decorator.  Unfortunately, she was involved in a nearly life-long feud with her famous surviving sister, Academy Award winner Olivia de Havilland (97) of whom she said, "I married first, won the Oscar before Olivia did, and if I die first, she'll undoubtedly be livid because I beat her to it!"
Posted by W. Hackwhacker at 9:08 AM