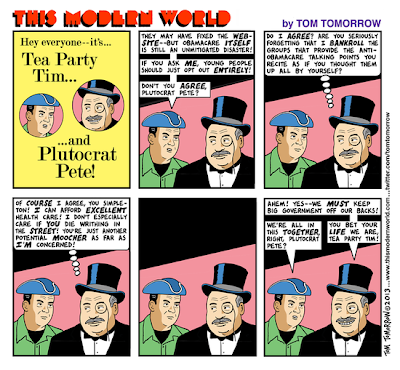 Maybe it was low-information voter Joe the (not a real) Plumber's modest success during the 2008 elections that sparked the imagination of the right-wing's money men to put a "populist" front on their 1% agenda.  They could certainly round up enough wingnuts, bigots and the like to form rallies, if there were the logistics provided to make it happen (money for organizing, buses, banners, loudspeakers, platforms, etc.).  It worked well enough to elect a tea bagger House in 2010, and to scare the shorts off of Rethuglican office holders.  But with the declining popularity of the teabaggers and multiple election losses recently, the magic is gone.

(cartoon:  Tom Tomorrow)
Posted by Hackwhackers at 10:18 AM