Li'l Danny Snyder Would NEVER Do Anything Self-Serving! 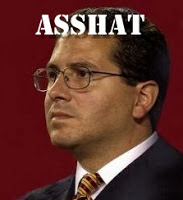 In the wake of the firestorm surrounding the use of a racial slur as the name of the Washington football team, team owner and marketing magnate Li'l Danny Snyder has apparently been making "secret" trips to Native American tribal areas.  Not that he wants that to be known, oh no!


The friend, who asked not to be identified because the team did not authorize him to speak on the matter, said he told Snyder that he should let people know about these trips.

“And his answer to me was: ‘Don’t you dare. They will falsely accuse me of doing this for material reasons, and I don’t want to give them that satisfaction when, in fact, I know that’s not true.’ ”  [our emphasis]

One thing is sure:  Li'l Danny and his p.r. ass-kissers know how to plant a story (and, by the way, we're getting a lot of satisfaction from reading this transparent hokum and knowing that it's exactly "for material reasons" he's had this leaked to the once great Washington Post Bezos Bugle).  Because of Li'l Danny's typically ham-handed mishandling of the issue of his football team's name (not to mention it's football operations), he's desperately trying to change the subject from his racial insensitivity to his heretofore well-hidden appreciation for the plight of Native Americans.  Is anyone who has the slightest knowledge about how Li'l Danny operates buying that?
Posted by W. Hackwhacker at 10:21 AM