That was nasty old grump Sen. John McCain (R - Bitterland) commenting on President Obama's handshake with Cuban dictator Raul Castro at Nelson Mandela's memorial service yesterday.  Apparently missing Mandela's message of reconciling with your enemies, ol' Grumpypants would have snubbed the handshake for domestic political points had he been (heaven forbid) elected President, which he will forever believe was his destiny until that black man came along.

But wait, who's this grizzled old dude shaking the hand of and BOWING to the late, bloody dictator Muammar Qaddafi?  Why it's old Grumpypants himself!  Darn those newfangled picture-taking thingys!  Well, at least it's not Hitler, right? 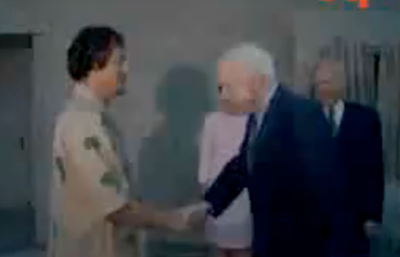 Posted by Hackwhackers at 5:33 PM