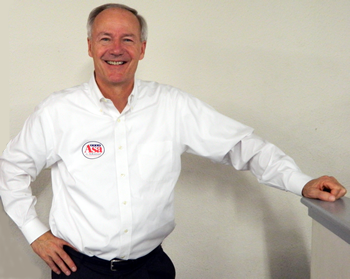 We saw a bit of farce play out yesterday in Arkansas, where Rethuglican gubernatorial candidate Asa "Assa" Hutchinson showed up at his polling place without the ID required as a result of the voter suppression law passed by the reactionary Arkansas legislature, which he strongly supports.   Not to worry.  Assa dispatched an aide to fetch his ID while he waited at the polls.

Imagine a worker voting on his lunch break having to rush back to where he or she left an ID, or a mom having someone babysit while she went to vote, only to discover her ID missing.  They can't dispatch an "aide" to retrieve the ID.  That, it seems, is the whole point:  voter ID laws were meant to make voting more difficult for working and middle class people, not the Assas of the world, who can send their help if they forgot their ID.

(photo:  "I'll strike a casual pose while you fetch my identification.  And be quick… I tee off at the club in an hour.")
Posted by Hackwhackers at 11:45 AM