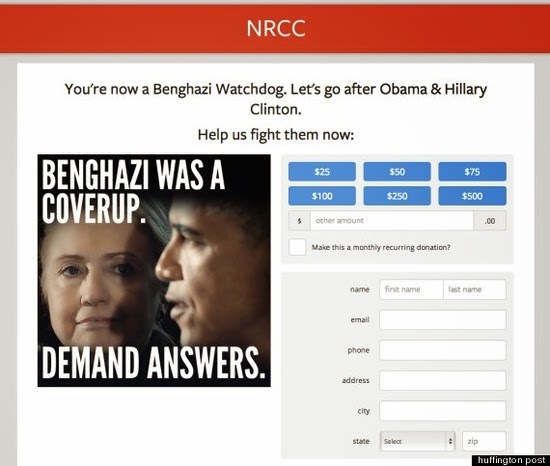 Here you have proof positive that the cynical Rethugs are shamelessly raising funds from their far-right base over the 2012 attack in Benghazi.  The National Republican Congressional Committee couldn't care less about the 4 Americans killed by terrorists, nor do they care enough to provide requested funds for security measures at our embassies and consulates.  The picture conflating the images of President Obama and former Secretary of State Clinton tells you this is about fundraising in 2014 and smearing the presumed Dem candidate in 2016.  Period.

BONUS:  Just how lucrative are these faux scandals as fundraisers? Check out this New Republic piece on how the Republican sheeple base is sheared.
Posted by Hackwhackers at 10:51 AM