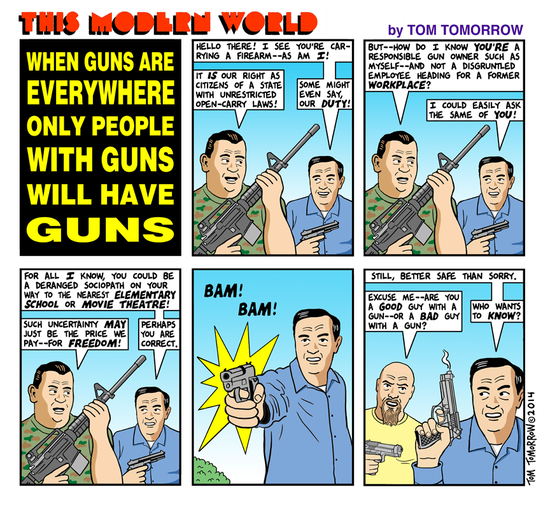 In guns everywhere news, there's this story today about the death of a 6 year old playing with a loaded handgun in Texas, and another today about an 8 year old in Indiana fatally shooting himself.  The guns were left unlocked by the parents.  And, seven people shot in a bar in Ohio, where it's legal to bring your Glock (thanks, Republicans!).

Then there's Wayne "Craziest Man on Earth" Lapierre of the NRA, mocking the #BringBackOurGirls campaign, and suggesting that "force" is the only answer (as long as someone else does the fighting) whether a tyrant, terrorist or your garden variety kid-with-a-hoodie.  Any guesses on how many of the 276 kidnapped girls would have been immediately shot if General Lapierre had gone in with guns blazing?

Last but not least, there's the report that thousands of dollars worth of ammunition was distributed to "mentally unbalanced" loons hanging around Nevada deadbeat rancher/racist Cliven "Hoof" Bundy's hellhole ranch, waiting to start trouble.

(cartoon: Tom Tomorrow, via DailyKos)
Posted by Hackwhackers at 12:29 PM