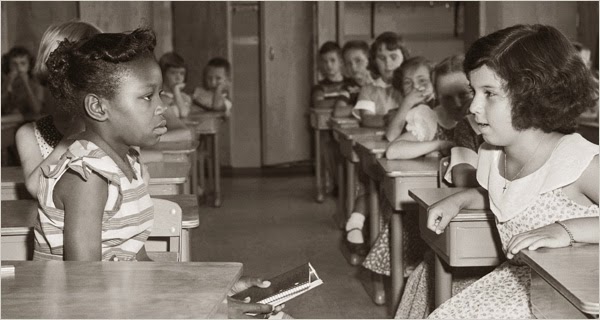 Yesterday was the 60th anniversary of the Supreme Court's decision Brown v. Board of Education, which overturned the "separate but equal" ruling (Plessy v. Ferguson, 1896) which allowed de facto racial discrimination in public schools.  The wheels were set in motion by a 16 year-old African-American high school student, Barbara Rose Johns, who walked out of Moton High School in Farmville, VA, as recounted in this interesting article.

The civil rights gains of the last 60 years are far from being certain, as a hostile right-wing exercises its political muscle in state legislatures, Congress, and in the current Supreme Court to undermine voting rights and affirmative action legislation.  Although they've switched uniforms from Dixiecrats to Republicans in the intervening years since 1954, the same reactionary forces are working continuously and perniciously to turn the clock back to those segregated days.  They have to be defeated.

(photo:  Ft. Myers, VA elementary school on the first day of desegregation in Sept. 1954.  Bettman/Corbis)
Posted by Hackwhackers at 11:50 AM

Labels: 60th anniversary of Brown v. Board of Education