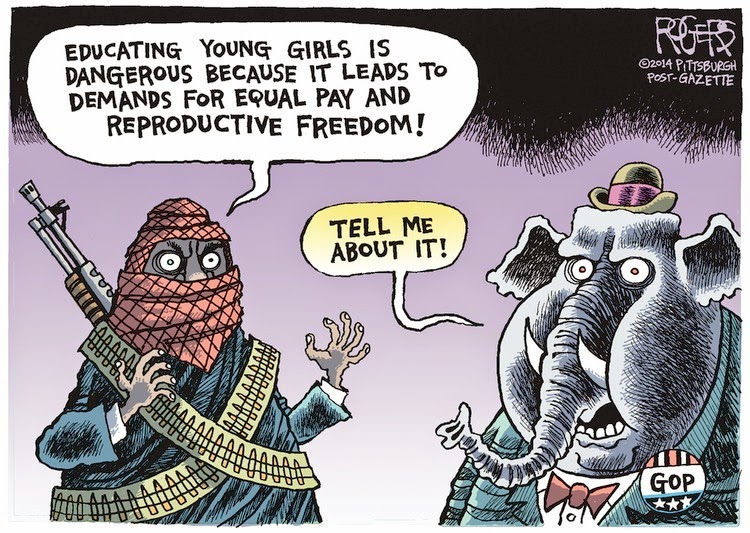 Leonard Pitts writes about the knee-jerk reaction of some on the right to the Twitter campaign #BringBackOurGirls that expressed support and concern for the Nigerian girls kidnapped by the terrorist group Boko Haram:


...As noted, [Rush] Limbaugh, [George F.] Will and the National Review have all pronounced themselves unimpressed. Donald Trump, Ann Coulter and Fox’s Steve Doocy have also made attempts at ridicule.

There is something more than usually saddening about that.

It is a truth curdling into cliche that American politics is riven by a partisan gap, left wing and right wing estranged from one another like the husband and wife in some long, bad marriage. But in its behavior here, the right does not so much seem estranged from a competing ideology as from its own humanity.

How is this a thing? How is an expression of caring, concern and outrage deemed worthy of mockery and condemnation? Are these people truly that corroded with cynicism and bile? Is their criticism now just a tic, a reflex bypassing thought? Is every damn thing to be reduced to politics?

"Estranged...from its own humanity."  That captures so much of what the right wing and its vessel -- the Republican Party -- is today.  Whether it's denying health care to millions of Americans, or voting rights for minorities, or immigration reform, or women's reproductive rights, or equal pay, or same-sex marriage, or sensible gun laws, or You Name It, this is a collection of sociopaths masquerading as a political movement.  It's no wonder they reacted to #BringBackOurGirls the way they did.