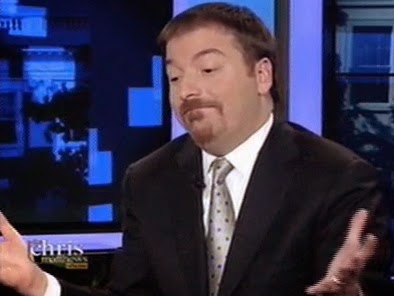 No one works the Sunday morning talk show circuses better than Arizona Sen. and sore loser John "McNasty" McCain.  When there's bombing a country in the Middle East on the agenda, McNasty (often accompanied by his sidekick South Carolina Sen. Huckleberry Butchmeup*) can be counted on to show up, bitterly wagging his finger at President Obama, whom McNasty will never forgive for beating his wrinkled butt in 2008.

In fact, McNasty holds the record for most appearances on the floundering Press the Meat show, and if yesterday's rub-a-dub with Chuck "Not My Job" Todd on his MSNBC show was any indication, McNasty will continue to be the virtual co-host on that program.  The two engaged in what can only be described as a mutual tongue bath, trading compliments, advice and broad smiles, signaling that Not My Job's tenure at Press the Meat will be little different from the departed Dancin' Dave Gregory's.
________
*Esquire.com's Charles P. Pierce's memorable moniker for Sen. Graham)
Posted by Hackwhackers at 10:49 AM