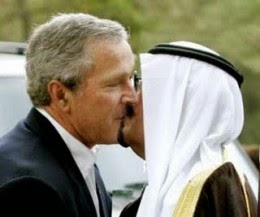 Saudi Arabia's King Abdullah, pictured here sharing a kiss with Dumbya, died yesterday at the age of 90.  Bush family ties to the Saudis go way back.

Saudi Arabia remains a breeding ground for radicals adhering to the extremist Wahabi sect, which is tolerated by the Saudi royal family.  Abdullah's predecessor, King Fahd, was instrumental in whisking members of the bin Laden family out of the U.S. following the 9-11 attacks, which were carried out in large part by Saudi nationals.  Saudi Prince Bandar bin Sultan, who served as ambassador to the U.S. during Dumbya's Presidency, was given the nickname "Bandar Bush" by Dumbya because of their unusually close relationship.

But President Obama's middle name is Hussein, so that makes it even….
Posted by Hackwhackers at 10:48 AM