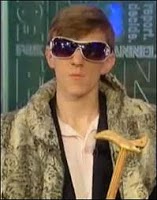 Deep in the sewers of the far right dwells a sleazy, dishonest provocateur by the name of James "G. Gordon Diddy" O'Keefe.  In the past, he's been caught posing as a "pimp" to smear the ACORN organization, attempting to bug the offices of Senator Mary Landrieu, selective tape editing to smear National Public Radio, and trying to get a female CNN reporter into a compromising position. Now, O'Keefe has been exposed by one of his former lieutenants for trying to infiltrate a march against police tactics used against Eric Gardner in New York City and trying to turn the march violent.  Better still, there is e-mail and other evidence to support the allegations. What makes O'Keefe's actions particularly despicable is that he wanted one of his operatives to play the role of a violent demonstrator and to incite other demonstrators to attack police at the march.

The former lieutenant has lawyered-up, indicating that there may be serious charges contemplated for O'Keefe.  One can only hope that he gets nailed with felony incitement to riot and whatever other credible felony charges they can make stick.  Then, he can take his"pimp" costume to prison, where we know it's bound to go over big.

Conservatives don't give a shit about Law Enforcement Officers. All conservatives care about is using each and every situation to advance their fascist agenda and take over of the United States.

And rightwing domestic terrorism is coddled and encouraged in this country so no conservative will repudiate convicted criminal james O'Keefe.

Gene -- Another case in point: the heavily-armed showdown at sagebrush moocher Cliven Bundy's "ranch" with law enforcement, cheered on by Fux and other right wingers.