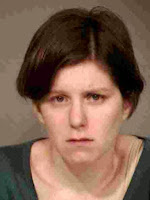 Teahadist nut Holly Nicole Solomon of Mesa, AZ was sentenced to 3 and a half years in prison for running over her now ex-husband in a parking lot after he admitted that he hadn't voted against President Obama in the 2012 election.  Her former husband, who sustained a broken pelvis and other injuries, testified that she believed that the re-election of the President would cause general harm to their family, and that she was enraged that he hadn't voted for man-of-the-people Willard "Corporations Are People" Romney.

Clearly this loon was either listening to voices in her head or to the right-wing Wurlitzer, or both, about the Armageddon that 'Murica faced if the Kenyan usurper Muslim dictator President was re-elected.  Either way, it's good she's going to the slammer, but it begs the question of how many thousands and thousands of other misguided cranks have the same warped view of reality and are willing to act out on an even bigger scale.

(photo:  Remember, it's all Obama's fault, Holly.)
Posted by Hackwhackers at 8:00 AM

Labels: AZ woman sentenced for running husband over for not voting for Romney