Picture of the Day - Mt. Denali 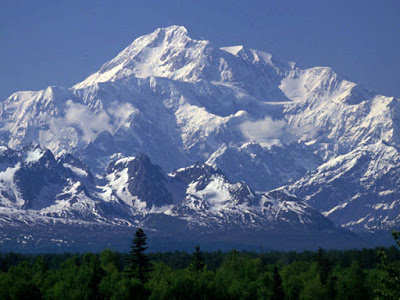 By order of President Obama today, the designation of the tallest peak in North America reverted back to Mt. Denali -- it's original name.  For more than a century, the mountain had been named after William McKinley by a gold prospector while McKinley was running for President because he favored the gold standard, as did the prospector, naturally.

The people of Alaska have been fighting to have the name revert back to Mt. Denali for over 40 years, but were blocked by Ohio Republican politicians, from whose state McKinley hailed.  The fight's been won, and now Mt. Denali has its rightful name back.

UPDATE:  Bezos Bugle columnist Dana Milbank notes that the renaming will become yet another molehill for Rethugs to whine about:

More likely, the mountain will be added to other molehills of Obama overreach: Obamacare, the stimulus, Dodd Frank, the IRS, immigration, executive appointments and on and on. The common objection to all of these is less about what was done than who did it." (emphasis added)