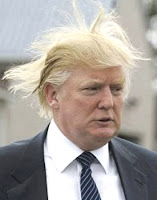 
Republican presidential candidate Donald Trump says that undocumented immigrants "have to go," and he has vowed to undo President Obama's Deferred Action for Childhood Arrivals program.

The comments underscore how Trump, who has regularly stoked controversy with comments on illegal immigration and border security, is running a very conservative campaign centered on the issues -- and one that puts him to the right of some of his key primary opponents. On Sunday, Trump released a position paper on immigration and border security that called on Mexico to pay for a wall on the southern border of the United States and force the "mandatory return of all criminal aliens" to their home countries.

He also against "birthright citizenship," which means he takes issue with the 14th Amendment to the Constitution, which states in Section 1: "All persons born or naturalized in the United States, and subject to the jurisdiction thereof, are citizens of the United States and of the State wherein they reside."  That Constitution -- it's for losers! You're fired!

But Rump thinks he's "number one with the Hispanics." Actually, we're sure they think he's "Number 2," if you get what we mean and we think you do.

UPDATE:  Rump's "plan" is being well-received by right-wing media and by racist know- nothings (i.e., The Republican Base).  Watch his poll numbers tick up.