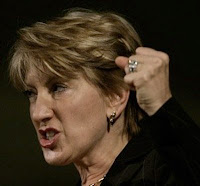 Now that the Beltway media's applause for her has somewhat subsided, Presidential wannabe and job destroyer Carly "Snarly" Fiorina has some 'splainin' to do about an impassioned tale she told about viewing a video of a fetal brain harvesting in a Planned Parenthood clinic during the Rethug "debate" on Wednesday.  After some in-depth checking, ABC News and the Wall Street Journal both concluded that Snarly saw no such video…because it doesn't exist, at least not among the doctored videos aired earlier this year by an extreme anti-abortion group.  When confronted about the dramatic whopper, Snarly doubled down and insisted that she had seen it.  Sort of like she saw Hewlett Packard's fortunes rise during her most excellent adventure there as CEO, until they paid her $20 million to get lost.

Snarly also leaves out some important details in her stump speech bio, that would prove that she's no up-from-the-working-class success story.  Her father, Joseph T. Sneed III (note: must resist "Snarly Sneed" moniker…) was the dean of the Duke University Law School, a Deputy Attorney General under Nixon, and later appointed to the 9th Circuit Court of Appeals.  She was educated at London's Channing School, and later at Stanford and MIT.  Her oft-mentioned start as a secretary was a few weeks during summer break in college, and a few months after leaving UCLA's law school.  Joining AT&T in 1980, she married an executive there in 1985 and from that point, she rose swiftly in the corporate ranks: AT&T, Lucent Technologies, and finally Hewlett Packard, each stop increasingly disastrous for the company.

Interestingly, when asked at the end of the Rethug "debate" what Secret Service code name she would choose, she answered "Secretariat."  Maybe that's because, like the late, famed race horse, Snarly generates a lot of horse manure.

BONUS:  Michael Tomasky explores Snarly's extreme warmongering approach to foreign affairs.  Her proposals would almost double the current Pentagon budget, and she'd make sure there would be plenty of war to justify it.
Posted by Hackwhackers at 9:16 AM