The Pope And His Detractors 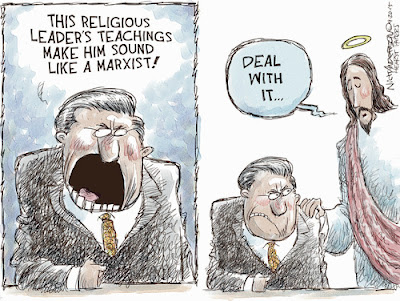 With the impending visit of Pope Francis to the United States this week, there's a new poll out showing the Pope is wildly popular with both Catholics and non-Catholics;  his church, not so much:


Pope Francis is adored by American Catholics and non-Catholics, who have embraced his optimism, humility and more inclusive tone. But as the 78-year-old pontiff arrives in the United States for his first visit, the public’s view of the Catholic Church is not nearly as favorable, according to a new Washington Post-ABC News poll. [snip]

The pope’s activism on social, economic and environmental issues is supported by a wide swath of Catholics and non-Catholics, with just 14 percent of Americans wishing he would be less active on those issues. Thirty percent of Catholics wish he would be more active on those issues, while more than half think Francis should continue as he has been. Just over half of non-Catholics are comfortable with his current level of outspokenness.

The poll also found limited discomfort about Francis’s speech Thursday before a joint meeting of Congress, the first for any pope. Two-thirds of Catholics said it was appropriate for him to address social, economic and environmental issues before lawmakers, as did nearly 6 in 10 among the public overall.  (our emphasis)

Immune to the Pope's charms are paleo-reactionaries like Republican cafeteria Catholic Rep. Paul Gosar (Fossil-AZ), who will boycott the Pope's address to Congress, and plutocrats' best friend columnist George "Quill" Will, whose tiny Tory fists are clenched in unholy rage against the Pontiff's messages of social and economic justice, and saving the planet:


Pope Francis embodies sanctity but comes trailing clouds of sanctimony. With a convert’s indiscriminate zeal, he embraces ideas impeccably fashionable, demonstrably false and deeply reactionary. They would devastate the poor on whose behalf he purports to speak — if his policy prescriptions were not as implausible as his social diagnoses are shrill.

Wow.  We might maybe give half a s**t about what "Quill" Will had to say about "sanctimony" had he, say, addressed the previous two conservative Pontiffs turning a largely blind eye to the pedophile crisis in the Church.  Or if "Quill" Will himself didn't absolutely reek of the sanctimony he falsely pins on Pope Francis (Will is, of course, a climate-change denier with ties to the fossil fuel industry; and an "independent journalist" who secretly helped St. Ronnie of Hollywood prepare for debates;  his second wife now works for Gov. Scott "Koch Head" Walker -- nice fellah).

Will, of course, is not alone in his Pope-rage.  Right-wing squealers from "Oxycontin" Rush Limbaugh to dullard pols like Rick "Frothy Mix" Santorum have criticized the Pope's refreshing new emphasis on issues that matter to people and the Earth.  Watching the tiny heads of these awful people explode is part of the pleasure in having Pope Francis speak out, knowing the vast majority of the public embraces him.