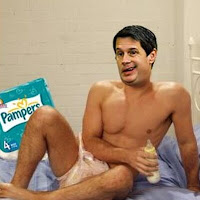 Yesterday, Louisiana voters rejected Rethuglican Sen. David "Diapers" Vitter's bid to be their next Governor and elected Dem John Bel Edwards with some 56% of the vote.  Edwards, a social conservative, is a State Representative who has deep roots in rural Louisiana and who served for eight years in the U.S. Army after graduating from West Point.  Diapers was notorious for his involvement in 2007's D.C. Madam prostitution scandal, reportedly fond of wearing diapers during his sexual encounters. There were also allegations that a prostitute had borne him a child a few years ago, despite his insistence that she get an abortion. Diapers made a scurrilous last ditch effort to turn the tide against him by lashing out at Syrian refugees (Edwards didn't distinguish himself either by declaring his opposition to receiving them). In his concession speech last night, Diapers also announced that he wouldn't be running for reelection to the Senate in 2016.

The Rethug brand on a state level in Louisiana has been severely damaged by years of gross mismanagement and the wingnut policies of failed Gov. Piyush "Bobby" Jindal, who dropped out of the Presidential race last week after languishing around 1% or lower in the Rethug clown bus polls. It won't mean that red Louisiana is turning blue or even purple, but it means that even some Rethuglican voters have limits to their hypocrisy.

The best news out of this, though, is that Governor- elect Edwards promised that his first act as Governor would be to expand Medicaid to nearly a quarter million Louisianans under the Affordable Care Act.
Posted by Hackwhackers at 8:02 AM