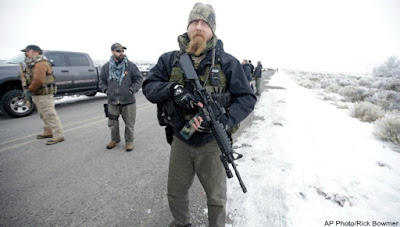 Just when you thought the seditionist, felonious, heavily armed jamokes occupying the Alamo Malheur wildlife refuge in Oregon couldn't be any more cowardly or depraved, there's this:

Members of the militia group lead by the Bundy clan have long stated they have women and children at the refuge, even implying their use as human shields against federal action. The group has also been free to come and go at will. But OPB has confirmed that two sisters, aged 8 and 9, have been continuously at the refuge as part of the occupation.

What responsible parents and manly men, willing to put innocent children into a situation where a killer and assorted brawling paranoid sociopaths with martyr complexes are holed up!

When this nest of rats is finally cleared out, those children need to be removed from that family and put into foster homes while their "parents" are serving long, well- deserved stretches in a Federal penitentiary.

(Photo:  Just the sort of hare- brained, hair- trigger cretins you'd want your pre- teen daughters to be having a month- long sleepover with!  - AP photo by Rick Brown)
Posted by W. Hackwhacker at 11:08 AM

This, like Waco and Ruby Ridge Wil end exactly as these whack jobs fantasize. Poor kids.
How long until the next "patriot" commits an atrocity like that in Oaklahoma City?

They're already scouting out the next Federal sites for takeover. At some point, they'll force the issue and get the reaction they so fervently desire.