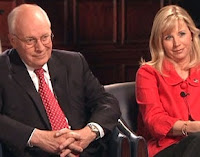 When last seen,  Liz "Lizard" Cheney, the loathsome daughter of unindicted war criminal Dick "The Dick" Cheney, was quitting on her 2014 race against incumbent Republican Mike Enzi for his Senate seat in Wyoming.  Cheney, who had only established residence in the state in 2012, was widely disliked in the state for challenging the popular Enzi.  She also created a rift in her family by openly opposing her lesbian sister Mary's right to marry, which was only one of several hiccups in her failed candidacy (it didn't help that she was running at least 28 points behind Enzi at any given time).

Sadly for Wyoming and for good government in general, Cheney has decided to give the voters of Wyoming another chance to reject her by embarking on another run for elected office in Wyoming.  This time, she's filed papers to run for the state's one Congressional seat, which is being vacated by retiring wingnut Rep. Cynthia Lummis.  She may have better odds this time, not facing a popular incumbent, nor having an opponent with her name recognition.  Then again, the "name" may not serve her any more than it did the last time.

(photo: The faces of entitlement: five-deferment daddy, and daddy's little deferment)
Posted by Hackwhackers at 11:40 AM

How about a Cheney-Palin ticket. They can be The Quitters running for the Losers Party.

We can't top that, Jerry. LOL.

Jerry- I think you've hit on a combination experts would call "Peak Quitter."