Afternoon Reading - "There's No Such Thing As A Good Trump Voter" 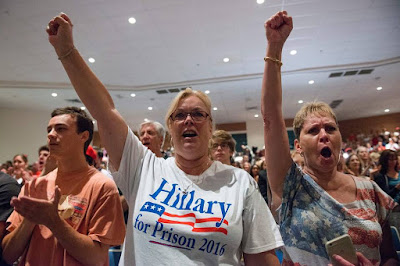 We're rather tired already of the corporate media's fetish -- extensive throughout the campaign, but still obnoxiously arising this morning in such places as the once great Washington Post Bezos Bugle  -- for chin- strokers about "The Trump Voter" and their "economic anxiety" and sense of (white) loss. Jamelle Bouie tells us what we need to hear amidst all this normalizing of the abnormal: "There's No Such Thing As A Good Trump Voter."


Whether Trump’s election reveals an “inherent malice” in his voters is irrelevant. What is relevant are the practical outcomes of a Trump presidency. Trump campaigned on state repression of disfavored minorities. He gives every sign that he plans to deliver that repression. This will mean disadvantage, immiseration, and violence for real people, people whose “inner pain and fear” were not reckoned worthy of many-thousand-word magazine feature stories. If you voted for Trump, you voted for this, regardless of what you believe about the groups in question. That you have black friends or Latino colleagues, that you think yourself to be tolerant and decent, doesn’t change the fact that you voted for racist policy that may affect, change, or harm their lives. And on that score, your frustration at being labeled a racist doesn’t justify or mitigate the moral weight of your political choice.

In the same way that the election-year demand for empathy toward Trump supporters obscured the consequences of Trump’s support for his targets, this demand for empathy does the same. It’s worse, in fact. In the wake of Trump’s win, the United States was hit with a wave of racist threats, agitation, harassment, and violence, following a year in which hate crimes against Muslim Americans and others reached historic highs. With Trump in office, millions of Americans face the prospect of a federal government that is hostile to their presence in this country, and which views them as an intrusion, even if they are citizens. Even if they’ve lived their entire lives as Americans.

To face those facts and then demand empathy for the people who made them a reality—who backed racist demagoguery, whatever their reasons—is to declare Trump’s victims less worthy of attention than his enablers. To insist Trump’s backers are good people is to treat their inner lives with more weight than the actual lives on the line under a Trump administration. At best, it’s myopic and solipsistic. At worst, it’s morally grotesque.  (our emphasis)

In Bouie's piece he notes a comment from the reptilian Chris "Lizard" Cillizza to the extent that (hot take alert!) we shouldn't treat all the shitgibbon's supporters as racists, misogynists, etc.  But, as Bouie says, the choice they made in voting for a racist, misogynist, etc., makes it "morally grotesque" to empathize with them.

Rest assured, we won't be giving out any cookies to these slugs, nor should anyone else.  In the meantime, as Bouie suggests, how about a little less attention to the Stormtrumpers and a little more to the current (a running compilation here) and future victims of the shitgibbon's white nationalism?

(Photo:  One of the more G-rated photos of good 'murrican Stormtrumpers - heil!)
Posted by W. Hackwhacker at 1:41 PM