Another Inmate Will Be Helping To Run The Trump Asylum (UPDATED) 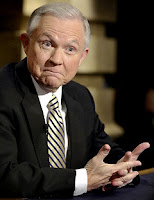 As they say, if you're shocked by any of this, you haven't been paying attention. (Also, "elections have consequences.")

The appointment of alt- right anti- Semite Steve "Assputin" Bannon as chief strategist and senior counselor to neo- fascist wig stand Donald "Rump" Trump was a yuuge tell.  Then there was Putin- curious Michael Flynn as National Security Advisor, a crackpot and a person whose shrouded, conflict- of- interest background mimics a Russian Matryoshka nesting doll. Now, here comes the latest inmate of the fringe right asylum reportedly ready to take his place in a critical government position.

Meet reported front- runner for Attorney General, Alabama Sen. Jefferson Beauregard Sessions III, an early Rump supporter and immigration hardliner. A person once deemed too racist to be appointed a Federal judge (by a Republican Senate!), Beauregard has a nasty history, as one might expect from an Alabama Republican:


Back in the mid-1980s, when Sessions was U.S. attorney for the Southern District of Alabama, President Ronald Reagan nominated him to become a federal judge. But during the nomination process, allegations emerged that Sessions had called a black attorney “boy,” that he suggested a white civil rights lawyer was a race traitor, that he joked he liked the Ku Klux Klan until he found out they smoked marijuana and that he referred to civil rights groups as “un-American” organizations trying to “force civil rights down the throats of people who were trying to put problems behind them.”

You were expecting Eric Holder?

More recently, here's where Beauregard stands on the issues:

-  Voted no on reauthorizing the Violence Against Women Act;

-  Voted no on adding sexual orientation to definition of hate crimes;

-  Rated 20% by the ACLU, indicating an anti- civil rights record;

-  Rated 0% by the HRC, indicating an anti- gay rights record;

-  Rated 7% by the NAACP, indicating an anti- affirmative action record.

So, we think it's safe to say Beauregard won't be looking after the best interests of women, minorities, or justice in general.  As a bonus, he seems the kind of AG that FBI Director Comey, his New York field office and Milwaukee County's skeevy Sheriff David Clarke (new Homeland Security Secretary?) can play ball with, though.

UPDATE:  Adding to the crackpottery at the most sensitive levels of government, there's this teabagger pol who's in line for CIA Director.  Nice. You think there'll be any pushback on Russia now?

UPDATE II:  Martin Longman takes a somewhat deeper dive into Flynn, Sessions and Pompeo (though, shall we say, the pool is rather shallow).
Posted by W. Hackwhacker at 9:39 AM